Recipe Post #3. So now that you've been here a few times what do you think? I keep telling myself that I want to keep trying new recipes, new foods, new techniques in cooking, in fact those are number 4, 5, and 6 on my 2012 New Years Resolution list. Number 1, 2, and 3 I'm still working on, you know, the typical ones, loose weight, exercise, be more organized. Ok, so I haven't done great so far, but hey, It's only the 4th of January, I've got time! This blog is another part of my resolutions, I want to have some place where people can come see what's going on in my kitchen. A place where new and exciting recipes can be found, as well as those old, traditional, family favorites. I started this blog with the intentions of growing my cupcake business, and it has helped, but I want now to focus more on what is going on, rather than just the end result. I want you to share with your family and friends these great recipes and ideas. Today's recipe I had never heard of until this past summer when I met and became friends with this crazy lady that dear hubby was doing some work for. You see, he's kind of a handy, fix-it-all kind of guy, who has the gift of gab with people. I met my now new friend Kris while dear hubby was installing some new windows. We chatted for a bit and the next thing you know, we're discussing recipes and cupcakes. She asked me if I had ever heard of Akutaq (pronouced a-goo-duk). Me being a midwestern flatlander I responded with an odd look I'm sure and politely said no. She told me that she thought it would make a great addition to a cupcake. She forwarded me the recipe and told me a little history and traditions behind akutaq. I thought after reading the recipe, how in the world would this ever work as part of a cupcake. I kind of dismissed the idea of using it and went on with baking cupcakes that were "normal".

After a few months the thought finally came back to me again that I really should try this recipe, after hearing Kris talk about it and watching some videos online I decided it was time to try it. After all, New Year's Resolution #4 & #8 are to try new recipes and to add an element of surprise to my blog. So here goes!

Akutaq (again, it's pronounced a-goo-duk for us non-Yupik folk) is a Yupik word for mix it together. For white man it's Eskimo Ice Cream. This recipe has been made by native Alaskans for many years as a food for survival.  When they went out to go hunting they brought along akutaq. Akutaq can also be made with moose meat and fat, caribou meat and fat, fish, seal oil, berries and other Alaskan things. But no worries, there is no fish, moose, caribou or any other living, breathing item in my recipe.

I have to stop for a minute and add a bit of honesty here. I know. It sounds disgusting, and it wasn't until I mixed it all together and tasted the smallest little bit that I possibly could that I realized, this isn't so bad after all. In fact, I remember the first word out of my mouth, "WOW". As in, "this is really good, why haven't I tried this before now?"

Okay, so, back to the recipe. I was trying to figure out just how I could use this with a cupcake and then I came across this. A cold-oven pound cake. Yep, that's right. Cold Oven. When I read the title of that recipe I can honestly say that I was confused and wondered if it was some type of no-bake cupcake. But that's not what the recipe said, it said Cold-Oven Pound Cake (honestly it probably should be called cooler temperature oven pound cake, but that doesn't sound as cool!) My friend Stef at Cupcake Project is amazing with cupcake recipes, a true cupcake genius! If you get the chance you should check out her website. So anyways, I was thinking, with this Akutaq I needed a cupcake that wasn't so expressive, or bold in flavor. The pound cake recipe was perfect!  I made it just how it was written. You see cold oven pound cake is just your typical pound cake recipe baked in an oven that is not preheated and baked at a lower temperature for a longer period of time. She also mentioned in the recipe that she baked half at the lower not preheated temperature and half at a preheated 350 degree temperature. I did the same. Both batches turned out amazing, with slightly different textures and flavors. You do whichever you prefer, or maybe even both. I have to say, the recipe says that it makes 20 cupcakes, from one single recipe I got easily 48 cupcakes so beware.


For the cupcakes:
If you decide you'd prefer doing the preheated cupcakes, just preheat to 350 and bake for 15-17 minutes.
﻿
﻿

Okay, so there are your cupcakes. Like I mentioned in the captions to the pictures, the cold oven cupcakes came out with a chewy top crust to the cakes with a little stronger almond flavor. The preheated oven ones had the flaky top crust, more of a dense cake with less of an almond flavor. I'm not sure if the higher temperature does something to the almond extract or not. They both tasted amazing though! I'd recommend them either way. And they are great plain, with no topping. But personally I like a nicely dressed cupcake. So onto the topping!! Oh, and by the way, I forgot to mention. I would say that neither of these recipes are heart healthy, just sayin!!  :o)

2 cups mashed potatoes. (Traditionally this part is made with boiled slamon or white fish.)
1 cup of lard or Crisco (I was able to get lard from my M.I.L. so that's what I used)
1 1/2 cup white sugar
1/4 cup Canola oil (I left this out. It was soft when I mixed it together, I didn't feel it needed more oil)
1 quart of salmon berries (I couldn't use these, salmon berries are not readily available in Ohio :)
1 quart of red raspberries
1 quart of blueberries

Now, I knew that I was using this to top a cupcake so I mixed the berries in with my mixer, from what I mostly saw online, it is usually mixed by hand or the berries are folded in after mixing the other ingredients together. Another note of interest, I was feeling lazy today, so I used instant mashed potato flakes. I'm not sure if it would change the consistency of the Akutaq if you were to use real potatoes. I'm sure it would make it a bit more stiff. I'll try that next time, but for now, it worked using instant.

Here you go! The final product! Eskimo Ice Cream Cupcakes!  A little piece of Alaska wherever you are in the world!! 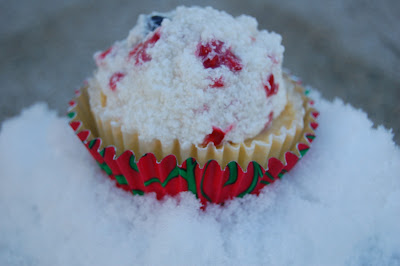