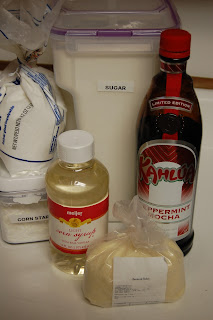 Okay, so as all of  you know, I've changed the format of this blog a little. I've gone from trying to stritcly show off my cupcake and cake pop creations, to sharing all of the great recipes I come across that I just can't wait to share with the world. This was supposed to be one of those recipes. I happened across this recipe when I was looking at blogs that were listed with foodieblogroll.com. I thought to myself, what a great reason to go buy that beatiful brown bottle of Kahlua I've been swooning over since before Christmas. Let's just say this recipe didn't turn out the way I was expecting it to. This just goes to show that even when you follow the directions with all of the right ingredients, if the tilt of the earth is not quite right, marshmallows won't set up. Okay, okay, so I can't blame it on the tilt of the earth, wasn't it just Nationa Blame It On Someone Else Day?

The above picture is about the best picture I got out of this entire process. I should have known from the beginning that this wasn't going to work. First off, here's the recipe I used, I got it here.

In the bowl of a standing mixer pour in Peppermint Mocha Kahlua.  Sprinkle gelatin on top.  Set aside.
Line a 9×9 baking pan with plastic wrap and spray with non-stick cooking spray.  Spray a spatula with non-stick spray and set with your pan.

In a medium size sauce pan add corn syrup, granulated sugar and water.  Turn to medium heat and whisk until the sugar is dissolved.  Try not to let any of the sugar mixture splash up the sides of the pan.  Stop stirring and clip on your candy thermometer.  Heat mixture without stirring until it reaches 240 F.
Once it hits 240 F (soft ball stage) remove from heat and pour directly over the Peppermint Mocha Kahlua.  It’s gonna bubble and steam.  Attach the whisk attachment to your standing mixer and start mixing.  Start on low and increase to high so it won’t splash everywhere.  Mix on high for 10 minutes or until your peaks get stiff. Do not scrap down the bowl.

Using your prepared spatula pour mixture into your prepared pan.  The stuff is STICKY and stringy so be prepared.  Once in the pan let sit for 4 hours or overnight until set.

Once set flip onto a cutting board and using a greased pizza cutter cut marshmallows into what ever size you like.  In a large ziplock bag add confectioners sugar, corn starch and espresso powder.  Shake the marshmallows in the mixture to prevent them from sticking together.

Now, let's jump back to the part where it says to use your candy thermometer, yep, first mistake. I could not find my candy thermometer anywhere! But I thought, 240 degrees is 240 degrees right? Why do I have to use a candy thermometer, I have a thermometer we use for our turkey deep fryer, that should work! Apparently not! As soon as I put it in the boiling pot of sugar, it immediatly went to 240. I've worked with candy long enough to know it doesn't set to soft ball stage the instant it boils so I knew I needed to let it boil a little longer. And I remember seeing something somewhere about dropping some of the mixture into water to see what stage it was at, well tried that too. Who knows what stage mine was it, certainly not set enough for marshmallows, I found that out a little too late in the process though.

After I mixed the syrup into the gelatin and Kahlua and whisked it to high heaven it still wouldn't peak, even after 15 minutes. I just had this sick feeling in my stomach that this wasn't working, and no, I didn't sample too much of the Kahlua! I kept on going, I poured the mixture into my prepared pan and with a slight glimmer of hope I let them sit. Afterall, in the original recipe she says that they'll be sticky and mine were totally sticky!

It says to let the mixture sit for 4 hours or overnight (now in my world, my overnight is a little longer than 4 hours) but I couldn't wait so 4 hours came and went, it was time to sample these delectible delights and dunk them in some hot chocolate. 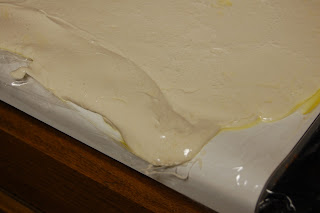 Yeah, from what I remember, marshmallows aren't supposed to run, unless they're oozing out from between two graham crackers. Now you see why this is titled Take 1. This whole process didn't turn out the way I had hoped, the good thing is, now I know, and I still have some Kahlua left so Round 2 will be coming soon!
Posted by cupsbykim at 12:58 PM