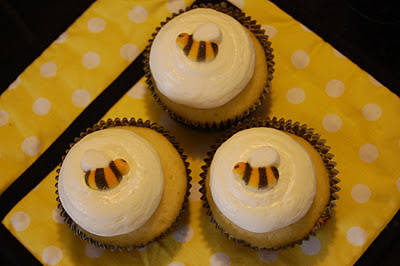 I have been a fan of the show Cucpake Wars since it started a few years ago, but what's with all of the odd flavors. Every time I watch the show it makes me want to get up off of my butt and go into my pantry and find the oddest flavors I can find an throw them into a cupcake. And as all of you know, they would turn out perfect! They would taste wonderful and everyone would want to indulge in a sea of odd cupcake creations right? Yeah, not so much. Well I was inspired after watching all of my DVR'd episodes over Christmas break to actually try making something that I hear so much about on Cupcake Wars. I alway hear them talking about mascarpone cheese and swiss meringue buttercream (I'll get to those someday). And what about goat cheese? Goat Cheese? Really? On a cupcake? Yes! On a cupcake!

I had never tried goat cheese before in my life. I figured I better try it first before putting it on or in a cupcake so that I know if it really tastes the way it should. I went to the grocery and bought a single package of goat cheese. It reminded me a lot of cream cheese but with more of a tang to it. It was very creamy and smooth, but again, I couldn't get past the sour tang that the cheese left behind. I didn't love it, but I didn't hate it either, and I figured that anything with powdered sugar and a cupcake behind it wouldn't taste so bad in the end anyway. So now that I've tasted the cheese. What was I going to put with it to make my tastebuds happy? I needed a flavor that wasn't as strong as the cheese, or anything that would overpower it. I did some searching again, on my most favorite cupcake site, http://www.cupcakeproject.com/ and found a recipe for an olive oil cupcake. I thought to myself, I've always wanted to try an olive oil cupcake, sounds like now is the time (and I liked it even more that I had most of the ingredients on hand to make it). Here's the recipe with the changes that I made to it. 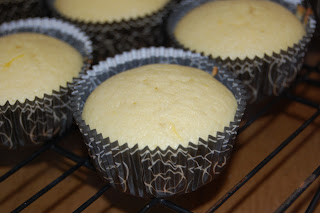 These cupcakes came out nice and fluffy, and had a great lemon flavor to them. I think the next time I make them though, I will use a little more lemon zest in them, but I like my lemon cupcakes to be lemony, you do yours however you like.

Combine goat cheese and cream cheese in a large mixing bowl with whisk attahcment. The cheeses will become very creamy the more you mix them. Slowly add in the powdered sugar until it is well combined and easy to spread or pipe onto the cupcakes.

That's it! Easy peasy lemon squeezy! I piped the frosting on the cupcakes and topped with these cute little sugar bees that I found here. 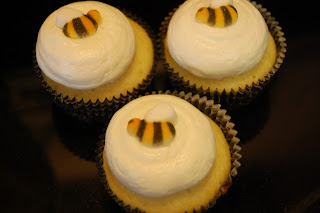 These were such a different tasting cupcake. The cake itself had a nice olive oil taste to it along with the lemon and then the tang of the goat cheese just played nicely with the cupcakes. I'm still trying to figure out another flavor of cupcake that would compliment this tangy yet smooth frosting. I guess I'm going to have to keep trying!!
Posted by cupsbykim at 10:25 AM