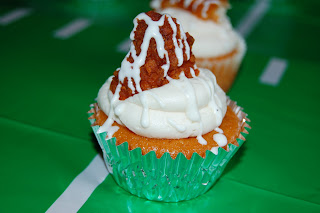 So maybe a few of you saw it on the national or even the local news over the last couple of days. Everyone is gearing up for some big game that's going on in Indy this weekend. One of the big news stories to go along with Super Bowl XLVI is the food. This cupcake has made the news more in the last week than probably any cupcake in world history.

A few weeks ago I was sitting down thinking, what kind of different cupcake could I make for the Super Bowl? What kind of foods can I incorporate into a cupcake? With many ideas swirling in this little brain of mine, I sat down at the computer and began researching. Apparently so was every other cupcake baker on the planet. I happened to see a post on Facebook from Stef at Cupcake Project. It was a teaser post letting all of her loyal followers know that she'd be posting a Super Bowl inspired cupcake in a couple of days and to keep an eye out for it. I politely responded back, "I hope you're not using buffalo chicken & ranch!"

A few days later, there it was. The cupcake to beat all other cupcakes! Stef had created a Buffalo Chicken and Blue Cheese Cupcake! Personally I couldn't wait to try it. This is exactly what I had been looking for.

A few days ago I strategically made my way through my local grocery store, making sure I had everything to make these for Super Bowl weekend. Little did I know when I pulled in the parking lot, everybody and their brother thought they needed to shop at the same grocery store I was. I'm on a time crunch here people, can't you see that. I couldn't believe the number of people that had chips and dips and other items to quench their super sized thirsts. I quickly made my way through there in record time! Okay! I've got everything I need.

So today was the day, time to start baking. As I mixed them up, at 6 am, I was instantly transported to our local wings & things restaurant. I could taste the hot, buttery wing sauce dripping off of a crispy, breaded part of the buffalo I've never seen. This is going to be amazing! I popped them in the oven and 15 short minutes later they were a beautiful, orange, hot saucy cupcake.

It was all I could do to wait long enough so that I wouldn't saute my tongue on the hot goodness. When I tasted one, I was amazed.

These cupcakes are not the pretty little cheerleaders of the cupcake world (we'll save that for Strawberry or Red Velvet).  These are the line backers, the full backs, heck, maybe even the quarter backs of The Cupcake Bowl. These are the tied in the 4th quarter, with only 5 seconds on the clock, punting a 55 yard field goal cupcake! They mean business!!

The flavor was amazing, it is a mix of brown sugar, butter, blue cheese, and hot sauce. And hot they were! They're definitely not a sweet cupcake, but I was about to change that.

I iced up some cupcakes and strategically placed a boneless buffalo wing atop the pile of frosting. Aaahhh. Beautiful! Or I guess handsome would be a better term ( I don't think any of the NFL linebackers would want to be referred to as beautiful!)

Now I was standing there admiring the concoction when I was thinking again how much I really dislike blue cheese, and I thought, well why not try ranch dressing instead (more to my taste). The top picture is just that!

So with all props to Stef from Cupcake Project for being the mind and create-all behind my thoughts, yet again ,I am amazed and I hope you will be too!!

Here's Cupcake Projects original recipe with a few changes I added in.