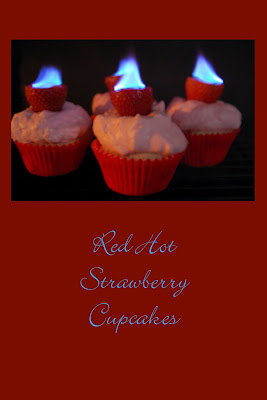 ﻿Adult disclaimer...the cupcakes, although enticing to people of all ages, they do contain alcohol, and my version, 100 proof alchol at that. I'd strongly suggest replacing the alcohol if you are making these for children.
Now onto the good stuff!  I got the inspiration for these cupcakes after seeing this technique on Cupcakes Take the Cake. I've always wanted to use a torch in the kitchen, and not because I don't like the way it's decorated! I have always felt a sense of excitement from the chared top of a Creme Brulee' and although most of the time S'mores aren't done over a flame in the kitchen I have been known to do it that way!  Stop back by on March 3 to see about that!
The cupcakes mentioned on the Cupcakes Take The Cake post lead me to here. Although these cupcakes were chocolate, I felt I had to incorporate the strawberry into the cupcakes after seeing them as the tops.
I decided to try doing a strawberry shortcake cupcake, and trust me I wasn't sure what I was even going to frost them with until after they came out of the oven. I decided to go with a simple homemade strawberry whipped cream frosting. Perfect!
The cupcakes not only contain fresh chopped strawberries, but I had to go with 100 proof Absolute Vodka for good measure. When I was reading about the flaming strawberries the blogger mentioned to use an alcohol with a proof of 90 or higher to get a good blue flame. To the alcohol cabinet I went! After inspecting a few bottles, I remembered that I had some Absolute put away for special occassions. That has to be higher than Pama! (wanna see those cupcakes? Go here.)
Here's the recipe I used for these cupcakes. We'll get to the flaming technique shortly!
Strawberry Shortcake Cupcakes
Cupcake Ingredients
Instructions
Strawberry Whipped Cream Frosting


Now, for the flaming part!! And yet another disclaimer... please do not attempt to eat the flaming strawberries. I know, that has to be put on there because someone obviously has or would try that!


WATCH 'EM BURN!!
I love these cupcakes! After I got over the initial amazement of the flame I ate the strawberry (left over vodka and all) and then bit into the cupcakes. It was the perfect balance of strawberries with a vanilla pound cake-esk cake. I think I have just found my new favorite cupcake (it doesn't hurt that it involves flame either)!
If you do want to make these without the liquor you could just replace it with more milk. You would definitly get the same texture of cake, but you'd miss out on the party on top!!
Posted by cupsbykim at 7:31 PM