I always wanted to be a Girl Scout. I was fascinated by the green uniforms. Not so much the entire uniform as much as the Girl Scout Sashes adorned with badges notifying the entire world of your accomplishments. I don't know, maybe it's an acceptance thing for me, or something that I wanted to be able to show the world just how amazing of a Girl Scout I was. Yeah, well, that lasted through about 2 years of Brownies. I never did get that amazing green dress, still to this day when I see a Girl Scout covered in all her radiant merit badge glory, I am inspired to do good deeds.

I try to support the Girl Scouts, and you know what that means! This time of year is Cookie Time! I started to think, what could I possibly do food wise to use up the 4+ boxes of cookies I ordered (as if straight up from the box with a ice cold glass of milk wouldn't work). I just so happen to follow Something Swanky and she has devloped what I would like to now call The 35 Pound  Series, simply because I'm sure after seeing all of her great recipes I'm bound to gain at least 35 pounds. She's done some amazing Girl Scout inspired recipes this week, this is just one of them!

She also does this Linky Party on Thursdays, Sweet Treats Thursdays. And this is where I found Crumbs and Chaos and this recipe.
Now I have to warn you, both of these recipes are simply delicious and addicting! I've made both of them in the last two days, and can't stay away from either one of them. Again it's a good thing that I work with 6 other equally hormonal women that I can share these with or I may just have to rename it The 85 Pound Series. Seriously, if you want or need something tasty to take to a party or just to get you through the 4 hour Daytona 500, these would be perfect! Both recipes are down at the bottom, just scroll down, or better yet, keep reading and eventually you'll make your way down there!

These days I'm getting a slight glimpse of the scouting lifestyle again, except from a different aspect. The world of Cub Scouts. Dear Son decided he wanted to be a Tiger Cub, so off to Cub Scouts we went. Well, Dear Son and Dear Hubby went. Mom stayed home :(  After a few months of scouting we've had a few different events that haven't really reminded me too much of my scouting days, although that was oh, let's just say, a few years ago.
Today we dove again into Cub Scout world with what is apparently the mecca of all scouting events. The Pinewood Derby. Now like some of you, I've heard of this event, but was truely unaware of what Pinewood Derby meant to Dad's and scouts. After two long weeks of preperation, today was the day. The day that all little boys dream of. The day they perch themselves atop a long, skillfully crafted race track, waiting for the flag to drop and for their car to go racing down the speedway into the winners circle. I never want to get my hopes up too much, for fear of being let down. But you know when you have that feeling that you just want them to win so bad, that was me. Round 1, he won. Round 2, he won. And so on and so on. Undefeated through 10 rounds of Pinewood Derby. First Place! His first time around he won First Place! Can you sense the excitement exuding from me. I still can't believe that on his first run of Pinewood Derby he did so well. I am a very pround Scouting Mama! 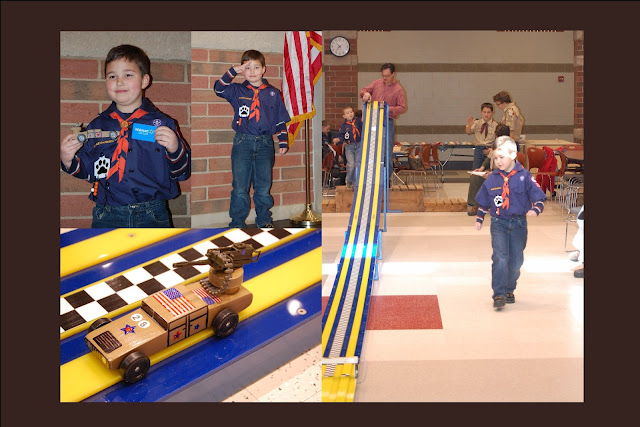 So anyways, enough about scouting, let's get to cooking! First we'll start with the Samoas Dip. This is the recipe from Something Swanky as she has it written I did go ahead and add more coconut, and trust me, it wasn't too much!

I served this with Mini Nilla Wafers and Graham Crackers and it was fabulous!

Next, Thin Mint Popcorn. This too is the recipe as is on Crumbs and Chaos.

Now, don't say I didn't warn you. Both of these recipes yield high consumption! Enjoy!!
Posted by cupsbykim at 7:32 PM