I can't believe it's been almost two months since I last posted on here. Obviously alot has been going on. After having a very successful year at the Sidney Farmers Market I decided to take some weekends off and spend it at the toddler gymnastics class at the "Y" with Sophie. This past weekend was my first big weekend back at it. It never fails, you hope and pray for busy weeks, and nothing, but then you know you have a busy weekend coming up and everything hits all at the same time! I have been planning this past weekend for the Sidney Charity League Christmas Bazaar for 6 months. I had no idea how many cupcakes to plan for since I had never been to the Christmas show before. From what everyone told me, it's huge and I should plan on a very large crowd. So with a little bit of help I prepared 26 dozen cupcakes. Yes, 26 dozen, that's 312 cupcakes! I thought that I was ready, had everything planned, had time to get them all prepared.

Then the phone rang. It was Wednesday afternoon.

You see I had gotten information about a Christmas Show at The Winery at Versailles and had called and planned on setting up for the show December 3rd. Little did I know that phone call would lead to an even greater opportunity. Later on that day I got another call from The Winery, asking if I make cakes or tortes. If any of you know me, you know that I do not do cakes! In fact I'm horrible at them! Just ask my husband. I regretfully told the lady this and figured that would be the end of the conversation. Not the case. They had a dinner event planned for Friday and Saturday night and their dessert caterer had cancelled on them. They needed 65 Chocolate Tortes by Friday night. Did I mention I don't do tortes or cakes. To my surprise she asked me if I would be able to do Chocolate Torte Cupcakes. Well I must have been delusional because I excitedly replied, "Absolutely!" "No problem at all"! Friday?! You mean this Friday? Two days away Friday? The Friday that I have 312 cupcakes to get ready?! Yep! That was the one! I replayed the conversation in my head as I Goggled "Chocolate Torte Cupcakes". Yes, I use Google for everything! I found 5 different recipes. For someone who has never had a Chocolate Torte, this was taking a shot in the dark. But as a great friend of mine always says, "What could go wrong?" I was ready, I could do this. I've got 24 hours to pull this off. Oh yeah, did I mention I had to have them ready by 7:00 am on Friday morning? And I have 312 cupcakes to have ready for Saturday? I can do this.


The chocolate cupcake part I was comfortable with. I can do cupcakes, no problem. It was the chocolate mousse filling I was concerned with. I consulted my mom, and proceeded with what I thought was going to work. Who knew that making chocolate mousse was such a time consuming process. I finished the first batch and thought to myself, "Boy, I hope I don't have to do that again anytime soon." Little did I know that I would be doing it all over again 30 minutes later when I was 6 cupcakes short of chocolate mousse filling. There actually was a point where I thought I may be able to scrape enough off of the already done cupcakes to put it on the 6 that were still naked. That's just how tired I was at that point. It was 11:30 pm on Thursday night. Did I mention that I had to have the cupcakes ready at 7:00 am the next morning, have myself ready for work, have Aiden ready for school, and have Sophie ready for the sitters by 7:00 am too? And it's 11:30 pm.  It's going to be a long night! So I got my 2nd batch of mousse made (definitely not as good as the first) but it will work. I dressed the cupcakes and was still considering at 1:00am Friday morning how to top them. You know how you get a brilliant idea in your head. You can picture it, and then when you try to do it, it just won't work? Well that was me at 1:00am Friday morning. I had this awesome idea for what to do on top, and when I did 4 cupcakes and realized it wasn't going to work, I gave up. Now what? I compromised with a simple top and finished up the 66 cupcakes just before 2:00 am. I went to bed thinking, this is all happening for a reason. I wouldn't have been given this opportunity if it weren't supposed to happen. I knew that getting my name out there, especially through a very well known business, was important if I wanted this business to continue. I figured even if I get a few calls out of this it would be worth it. I tucked my cupcakes into their boxes and off to bed I went. Four hours later, I was up, dressed, kids ready, cupcakes packed and delivered. I thought to myself, that wasn't too bad :o) 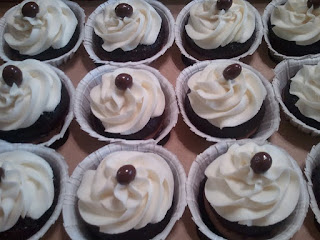 So now it's a waiting game. My business cards were given out to 65 new people. Let's just hope that those 65 people make the long night all worth it!

There's a saying, "No rest for the weary." Ultimately means that no matter how tired or overworked you are, you must keep going to persevere. Definitely the definition I'm living by! 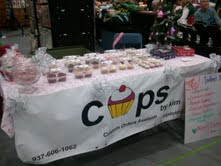 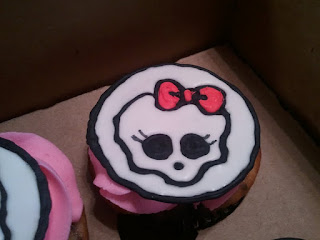 Posted by cupsbykim at 6:23 PM